Yesterday Being Memorial Day I decided to pay my respects and fulfill one of the things on my personal list. At 0931 I left Meadowbrook Camping Area heading towards Greenville, Me. As I headed towards Brunswick I decided that I would only take back roads to the crash site.  Al through I hit a snag in Brunswick as I ran into the Parade so I had to detour on RT1 to Topsham and picked up RT 201 north and as i hit Gardner I ran into another Parade that was just finishing.  Gardner is a good place to stop at Dunkin Donuts for a pit stop and fresh cup of coffee.  Next heading into Augusta and Passed the Capital  on rt 201 north and  to RT 27 and heading to Belgrade Lakes region. I decided to turn off of RT27 onto Rt8/RT 11, as i have never been that way. This is really back roads and also a seanic route. As i headed north on RT8/11 i must have lost my way as i wound up in Waterville and picked up RT201 North heading towards Skowhegan, The home of Margaret Chase Smith, a state senator from Maine. I had the Pleasure of meeting her in the late 60’s at a friend’s house. As i continued up RT201 and headed into Bingham, and a right hand turn  and picked up RT 16 heading towards Abbot Village at RT6. A left hand turn onto Rt6 Heading towards Greenville.  This was a familiar route as this road is the one i usually take towards Greenville. This is a very interesting  road to Ride but you need to watch out for Moose.  As i was continuing towards Greenville, i was coming into Shirley. A friend of mine Skip Hickey has his camp here.  But he was in Hawaii so couldn’t stop so I continued on.  As I continued and just starting to come into Greenville, I saw  a few cars off on the side  of the Road. As I got closer I could see a moose had just crossed the road and i saw the tail end of him heading into the woods. This is great moose country and you can always find a moose somewhere up in this area.  As i continued into Greenville you start to see Moosehead lake. This is a big and Beautiful lake.  Today, we will be riding up the right side of the lake on Lily Bay Rd., heading north a few miles out of town.  I was looking for, according to my directions, Elephant Mountain Trail. But i never found it. When i saw Lily Bay state park I pulled into their and asked directions. The ranger at park told me to turn around and find Prong Pond rd and that was about 2 miles back.  that will lead me to Elephant mountain and the B-52 crash site.  She told me that a couple miles in I will start seeing signs to the crash site. I thanked her and headed back to Prong Pond rd. As I turned onto the Prong Pond rd. I could see that it was a dirt road, although it looked in good shape I would have to go slow.  Their were rocks sticking up and culverts that had small wash outs around them.  I continued down the road at a slow pace.  The ranger told me that the site was about 7 miles back this road.  as I finished my 3rd mile I saw my first sign that said B-52 crash site.  I continued on taking it slow, The road was gravel but in pretty good shape if you paid attention.

As I came to the to the path I parked the trike on side of road. 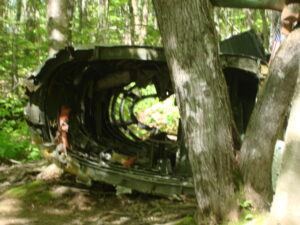 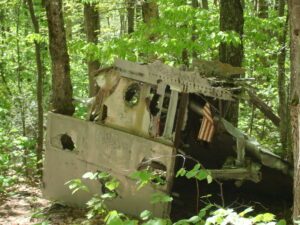 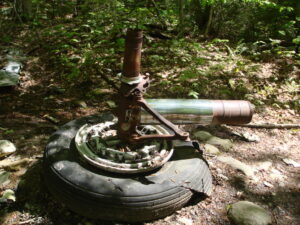 As I entered the path I had only walked approx 20 feet before i saw the first part of debris. As I walked up the path, an earey feeling came over me.

The further into the woods i went the more debris that i saw. As i approached the cockpit i saw that someone had placed an American Flag. I saluted and headed back to Meadowbrook Camping .

I recently received a book called ” Final Mission, The North Woods” by Joseph R. Wax, and i highly recommend this publication. He goes into great detail of all of the effected families.

For info on crash go to http://www.moosehead.net/history/B-52.html